A year ago, Brazil emerged from a deep three-year recession, its worst in many decades. The business outlook has improved rapidly with the return to growth.
However, Q4 GDP growth was disappointing, at just 0.1% year-on-year. Then in Q1, unemployment, which had been on a declining trend, rebounded to 13.1%. This economic softening likely explains, at least in part, the decline in optimism to net 26% (down from a recent peak of 59% in Q4 2016). Despite this, mid-market business leaders still have strong hopes for growing revenue (net 67%) and profits (net 48%). 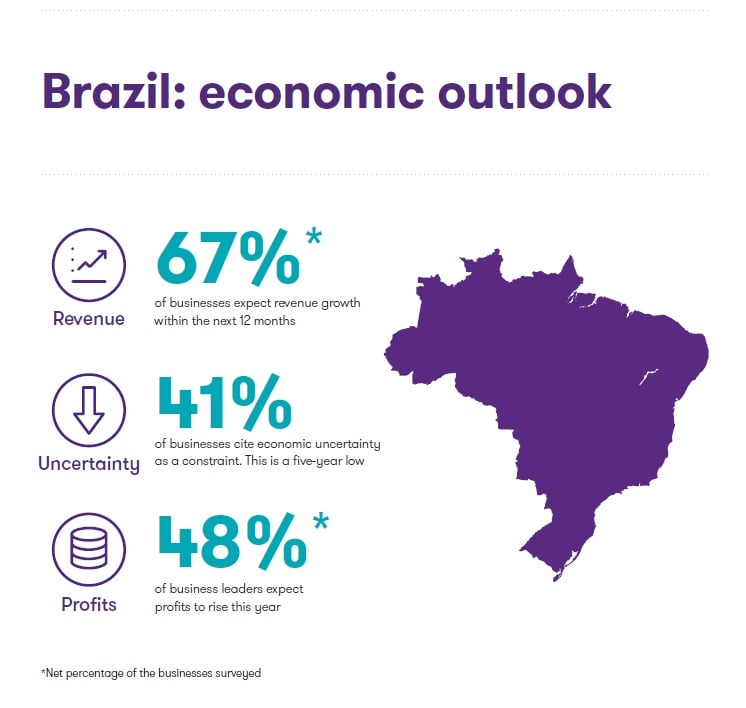 Inflation has dropped sharply, to under 3%, having peaked at 11% at the end of2016. This has enabled the central bank to cut its benchmark Selic rate to a record low of 6.5% in March. Lower rates should facilitate borrowing and in turn boost spending and investment. The government is also pushing ahead with a program of market-orientated reforms, including tax simplification. The IMF has a positive outlook, forecasting real GDP growth of 2.4% in 2018-19, up from 1% in 2017.

Economic uncertainty persists, but is at a five-year low

There is still a broad range of constraints cited by businesses. This includes inadequate communications infrastructure (23%) and shortages of financing (28%). An overarching concern is the Brazilian presidential election in October. It is the most open race in decades, making it hard to predict if the next government will press ahead on key issues such as pension reform needed to stabilise public finances.

That said, Brazilian firms are experienced in navigating political turbulence. Economic uncertainty is citied as a constraint by 41% of firms. Although this is high by regional and global standards, it is actually at a five-year low for Brazil.