The IBR survey was conducted before the dramatic developments in Argentina in May. A sharp drop in the peso led to a hike in interest rates to 40% and a request for IMF assistance. This was a bold move, given longstanding domestic criticism of IMF structural adjustment policies. However, financing from the Fund should help stabilise the peso and permit the government to continue with necessary reforms. 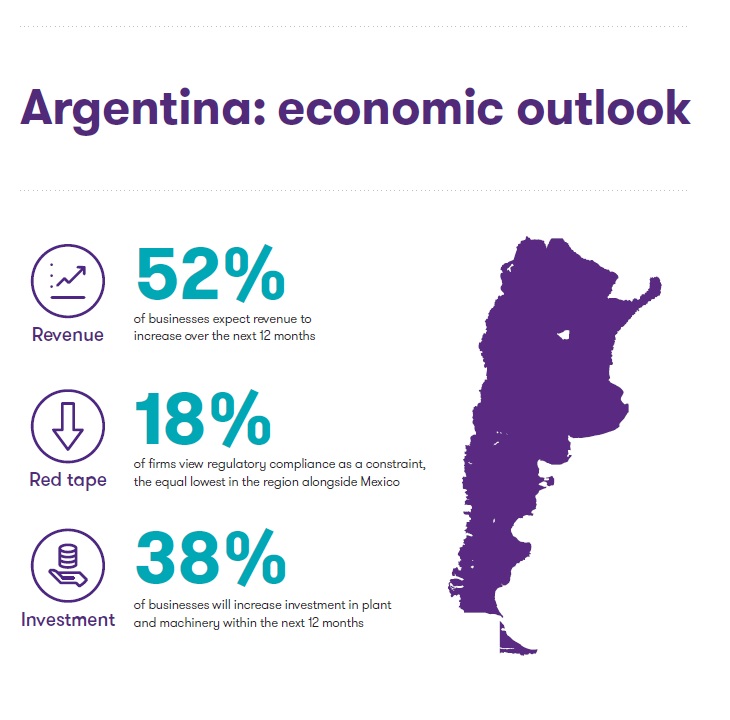 The views expressed by the business leaders we surveyed in Q1 were indicative of the challenges ahead for Argentina. Optimism, which had been running at a two-year high (net 48%) in Q4 dropped to nearly a two-year low (net 16%).

All our ten underlying indicators of business growth, which had been running at or near the highest in the Americas, dropped in Q1. Some fell very sharply, such as expectations for profit growth, where others were down by 32 percentage points to net 10%.

At the same time, concerns grew about constraints. A net 50% of firms worried about economic uncertainty and a similar amount about rising energy costs.

Argentina’s recent problems appear to have been mainly a reflection of global market trends, rather than any negative domestic developments. Investors have been shifting out of emerging markets in response to rising US interest rates and a renewed “risk on” attitude.

The underlying economic story in Argentina has been a positive one over the last two years. Negotiations with holdout creditors reopened access to global financial markets, subsidy cuts and business friendly reforms are also positive developments. Real GDP growth was 3.9% in Q4 and the IMF forecasts a healthy 2.6% in 2018-19.

This is reflected in the fact that most mid-market business leaders still expect to grow revenue. In addition, the proportion of firms planning new capital investments this year (38%) is the equal highest in the Americas and concerns about regulatory constraints are the equal lowest in the region (18%).

This all suggests that there is hope that Argentina, which has tremendous resources of physical and human capital, may yet give a positive surprise.