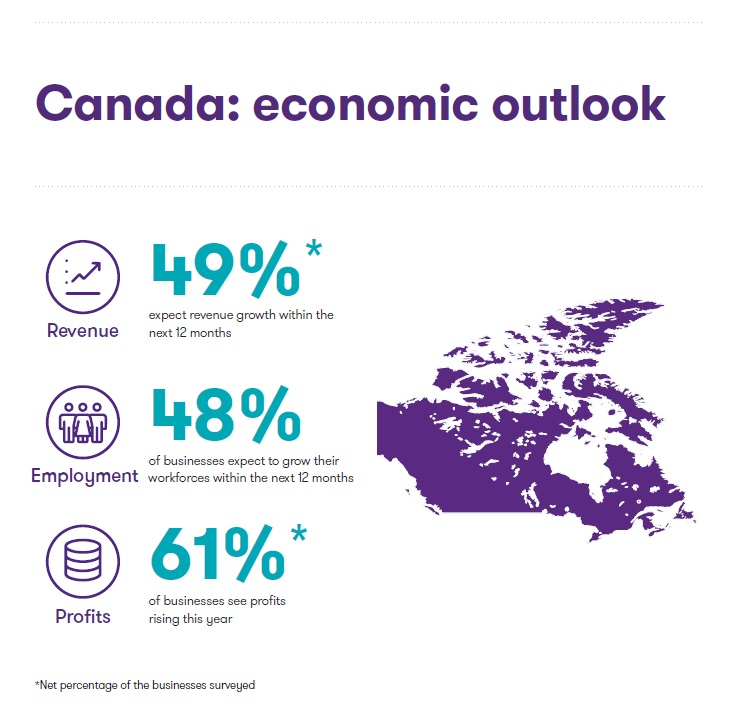 Although net optimism amongst business leaders has slipped from a five-year high in Q4, it is still strong at net 41%. This makes sense because the Canadian economy grew by a robust 3% in 2017. Also, important parts of a free trade deal with the EU, Canada’s second largest trade partner, came into effect in September 2017 (on a provisional basis). Rising commodity prices in 2018 are also providing a boost, given its large hydrocarbons sector.

A net 61% of Canadian firms expect profits to rise this year, a record level and even higher than in the US. In addition, net 49% expect revenue growth, down slightly from Q4 but still a strong positive indicator.

The reasons behind the easing in overall optimism are not clear-cut. It may in part be due to worries about an increased regulatory burden. Red tape was the most frequently cited constraint, mentioned by 44% of firms (up from 32% in Q4). Higher energy costs, though good for the oil sector, are a constraint for others. They were mentioned by 32% of firms, up from just 12% in Q4, the biggest quarterly increase in concern for any of the nine potential constraints covered in our business leader survey.

Another worry is economic uncertainty, mentioned by 33% of businesses. Rising rates could harm consumer spending, given the high levels of household debt. There is a risk that the US could withdraw from NAFTA, which would be very damaging for many Canadian exporters because three quarters of exports go to the US. There is also a more positive scenario for Canada, in which NAFTA renegotiations provide enhanced access to the US, including government procurement contracts.

As in the US, labour availability has become a major constraint, even as net 48% of firms want to boost staff levels. Unemployment is 5.8%, the lowest level since 1976. Hence 43% of firms cited availability of skilled workers as an issue (albeit fewer than in Q4) and 28% expect an above-inflation boost to salaries this year.