Ed Nusbaum on why governments should not ignore the 'middle child'

Imagine a sector that accounts for approximately USD11.5trn or 30% of the global economy. It is fast-growing, productive and innovative, directly supporting 169m jobs; nimble enough to respond quickly to changes in consumer tastes, but robust enough to export and invest heavily in R&D.

Surely this is a sector too important to be ignored?

Well, no, according to a report released last month by HSBC - Hidden Impact: The Vital Role Of Mid-Market Enterprises [PDF - 3.5MB]  - which quantifies the impact of the MMEs[1] segment on 15 of the largest economies in the world.

The report argues that despite their serious economic heft these businesses suffer from the 'middle child syndrome'. In other words, they cannot afford to pay for expensive lobbyists to push their interests in the corridors of power, but equally they miss out on many of the incentives and other support offered to start-ups and small businesses. The danger of course is that the sector is ignored, undervalued and taken for granted. 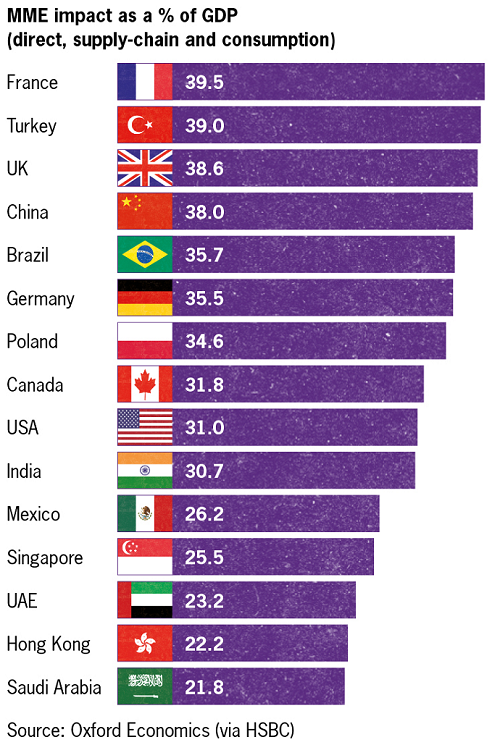 The HSBC report impressively demonstrates the economic importance of this segment. It finds, for example that MMEs support approximately close to two-fifths of GDP in Brazil, China, France, Turkey and the UK. Even in India and the US, which are at the lower end of the spectrum, MMEs support 31% of total output. Employment contributions are equally impressive, ranging from over 40% in China to 29% in the US and 22% in Hong Kong.

The findings echo those of , the Grant Thornton UK series on supporting the growth of mid-market businesses, which not only found that UK MMEs are spending more on R&D and capital than larger and smaller peers, but also that they are the most productive segment of the economy.

The conclusion that both reports make is that the mid-market is too important to be overlooked by policymakers. Businesses require support in specific areas such as international expansion and attracting the right workers, and governments could also look at the removal of perverse incentives (for example, tax breaks which end when a company reaches a certain size) that encourage businesses not to grow.

MMEs contribute in many high value-add sectors such as business services and others with strong supply chain effects such as manufacturing, while outstanding levels of productivity means any government looking to grow its economy (hopefully all of them) should be working to unlock the potential of this segment. Their impact on economic and employment prospects is simply too big to be ignored.