Global business concerns over a shortage of skilled workers hit a record high in the second quarter of 2018, according to research from Grant Thornton’s International Business Report (IBR). Some of the world’s largest economies, drivers of global trade, report significantly higher fears. Business leaders struggling to recruit skilled staff should consider automating processes where skilled worker problems are most acute.

Fears that lack of skills will hamper growth

The proportion of business leaders who cite a lack of skilled workers as a constraint to growth sits at 40% worldwide in Q2 2018. This is the highest figure recorded in over a decade of IBR research and represents a 4pp increase from the previous quarter.

Concerns have increased most notably in some of the world's biggest economies. The proportion of businesses in the US citing skills shortages as a growth constraint sits at an all-time high of 38% - up 8pp on Q1. In China concerns have also risen 8pp to 38%, the highest figure in over three years. German firms also report their highest ever level of concern, a huge increase of 25pp to 74%.

This sharp uptick is not only confined to these economies, however. Across the Asia Pacific region, the proportion of firms citing skilled worker shortages as a constraint has increased 5pp to 48%. In the European Union, it stands at 40%, an increase of 4pp. Likewise, North American firms report an 8pp rise to 39%. Only Africa (where the proportion of firms concerned over skills fell 8pp) and Latin America (down 9pp) buck the trend in Q2. 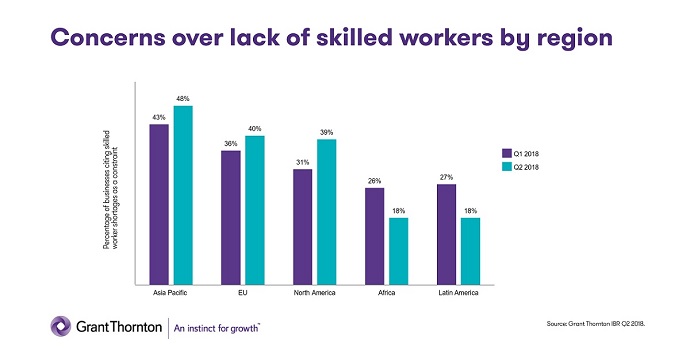 Major trading nations could be victims of their own success

Businesses in China, the United States and Germany have become much more worried about skills shortages in recent months. These were the three biggest exporting nations in the world in 2017.[i] Japan, the country in fourth place for exports, consistently tops the IBR charts for the highest concerns over a lack of skilled workers.

Japan’s worries over skills are due in part to an ageing population and extremely low unemployment rates, which hit a 24-year low at the end of 2017.[ii] But, together with China, the US and Germany, it appears heavy trade flows could also be a contributing factor, since the supply of skilled staff is not increasing in step.

According to Francesca Lagerberg, Global leader – network development at Grant Thornton: “These major economies are victims of their own success when it comes to skilled workers. Despite recent fears over potential trade wars, in previous years global trade flows have increased significantly. These economies have been at the forefront of that increase. As demand grows for their products and services, it appears that for some the supply of skilled staff is not keeping pace.”

As the right workers become harder to find, businesses could meet demand and boost their productivity by turning to technology and automating certain processes.

Indeed, as concerns around skilled workers rise, some businesses are already starting to invest more in their technology. Germany witnessed the biggest increase in skills concerns worldwide in Q2. Net 49% of firms there say they plan to invest more in technology over the next 12 months. This is an increase of 5pp compared to the previous quarter.

Globally, the proportion of businesses who plan to invest more in technology has crept up from net 44% at the end of last year to net 48% now. However, plans to boost research and development (R&D) remain stubbornly flat.

Conversely, in China, while expectations for increased R&D spend have ticked up in Q2, plans to increase investment in technology are unchanged at net 49%. And in the US, the proportion of firms who plan to increase technology investment has dropped 3pp to net 60%.

There is no single solution to the skilled worker shortage. IBR data shows that in recent years, businesses have planned pay increases to retain the skilled staff they already employ. Alongside this, greater use of automated processes may also reduce the dependence on humans with the right combination of skills, a resource which many firms are reporting is scarce.

Francesca Lagerberg adds: “Automation will not solve these skilled labour problems overnight. But with business fears hitting record levels, all possible solutions are worth exploring. Businesses should consider ways to research or invest in new technologies that take the strain off their workforce. And which reduce the need to employ more staff from what, for many firms, must feel like a shrinking talent pool.”

Record ASEAN business confidence under threat from US rate rises

A bump in the road?