Optimism in the European Union (EU) dropped in Q2 2018 compared to the start of the year, according to Grant Thornton’s International Business Report (IBR). As the rise of populist sentiment fuels economic uncertainty, businesses are holding back on investment. However, since the current economic cycle may be coming off its peak, business leaders should keep these challenges in perspective, remain flexible, and focus on structural investment to enable longer-term growth and prosperity. 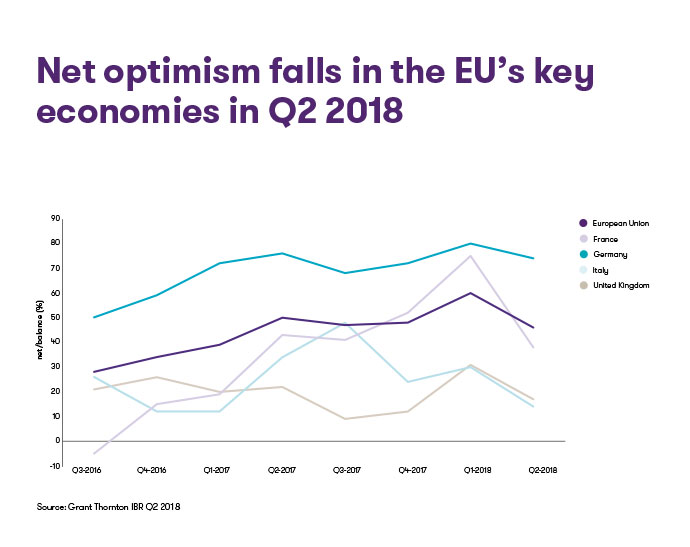 In Q1 2018, EU business optimism reached a record high at net 60%. It reached new heights in France (net 75%) – with the so-called ‘Macron effect’ rubbing off on French business leaders – and the UK was at its most optimistic (net 31%) since voting to leave the EU. Optimism in southern Europe was unprecedented, with Greek business confidence reaching positive territory for the first time in three years.

What are the reasons behind this? In Q1, the IBR revealed that while optimism and economic performance remained strong in the EU, a number of complex political concerns were on the horizon.

The biggest concern cited by business leaders is the rise in populist sentiment. One in five (19%) eurozone businesses cite the rise in popularity of nationalist political parties as the biggest threat to the economic stability of the EU. There are concerns among business leaders that nationalism will undermine the future of existing trade rules and economic integration within the EU.

As Francesca Lagerberg, Global Leader Network Development at Grant Thornton, explains: “The mood among Europe’s economic heavyweight economies typifies the wider region. We know from our own research that eurozone businesses rank the rise in nationalist political parties as the biggest threat to economic stability – above Brexit concerns. These figures suggest recent political developments in countries such as Italy have taken a toll on the outlook for firms.”

The IBR also shows that European business are concerned about economic integration. Across the eurozone 65% of businesses would like to see further EU economic integration, up from 63% last year. However, just 35% want further political integration. This is down from 44% last year, and has likely been weakened on account of uncertainty surrounding the rise of populist parties in the region. Germany is the only country where more than half of business leaders (63%) want to see further political integration. 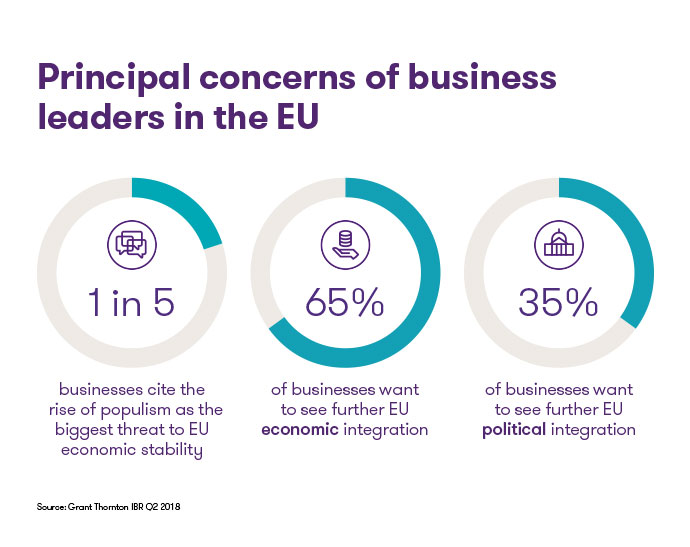 With political uncertainty persisting, EU businesses are holding off on making the big investment decisions. Data from the IBR reflects this, showing that in Q2, investment levels remained flat. Investment in research and development (R&D) in the EU is down 1pp to 19% in Q2. Investment in plant and machinery also fell 1pp to 41%. Investment in new buildings fell 2pp to 20%, and investment in technology remains flat, rising slightly from 42% in Q1 to 46% in Q2.

This lack of investment is a concern as research indicates that the global economic cycle may have reached its peak. The IBR observes that optimism is decreasing globally, suggesting that there is a potential economic downturn on the horizon. Data from Eurostat shows that growth in the Eurozone slowed from 0.7 percent in the last quarter of 2017 to 0.4 percent in the first quarter of 2018, which is a sharp decline.[i] Businesses would do well to invest now in order to ride out the economic shift economists are predicting.

The need for businesses to make structural investments sooner rather than later is evident in IBR research. From Q3 2016 through to Q2 2018, there has been a steady increase in the number of businesses reporting lack of skilled workers as a constraint, rising from 26% to 40% respectively. 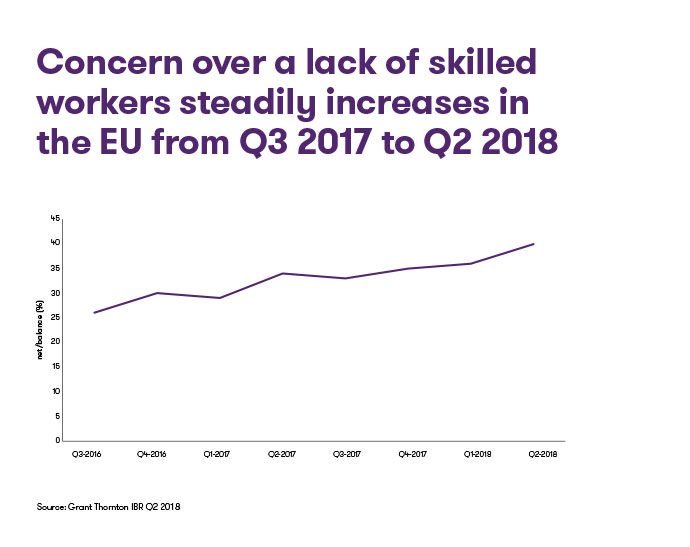 Despite political uncertainties, businesses are confident about their own performance over the next year and economic fundamentals remain strong. Profitability expectations across the EU remain steady at net 40% and, while optimism in the region has fallen, it is still robust. All this suggests that EU businesses are in a strong position to make the structural investments they need to prepare them for a predicted downturn.

The message to businesses is to identify structural investment opportunities at the peak of this cycle. Focusing on structural growth at this stage will enable businesses to bolster their workforces and infrastructure, and improve their agility and flexibility, empowering them to react swiftly to the economic and political shifts on the horizon.

Structural growth may also allow businesses to establish or grow a presence in markets outside Europe, a sensible strategy for firms looking to mitigate potential risks from future instability closer to home.

By keeping uncertainty in perspective and maintaining an agile approach at the peak of this cycle, businesses can use structural investment to guard against economic and political challenges, and ensure future growth and prosperity.

Find out more about the International Business Report (IBR)

Record ASEAN business confidence under threat from US rate rises

A bump in the road?