Under IFRS 16 ‘Leases’, determining the correct lease term is significant for a number of reasons. Firstly, the longer the lease term, the larger the lessee’s right-of-use asset and lease liability will be. Secondly, the length of the lease term determines whether a lease qualifies for the short-term lease exemption. Finally, IFRS 16 contains additional application guidance on how to deal with periods covered by options to extend or terminate a lease. While this detailed guidance can be helpful, determining the lease term is not an easy task to undertake and we set out below what factors should be taken into consideration.

In our view, ascertaining the correct lease term is one of the most challenging issues in applying IFRS 16 as it is likely to require a significant level of judgement. 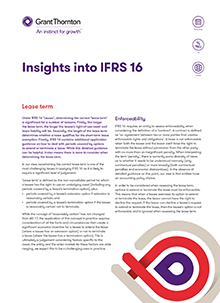 'Lease term' is defined as the non-cancellable period for which a lessee has the right to use an underlying asset (including any periods covered by a lessor’s termination option), plus:

While the concept of ‘reasonably certain’ did not change when IFRS 16 was implemented, this is considered a fairly high hurdle and the application of this concept in practice requires consideration of all the facts and circumstances that create a significant economic incentive for a lessee to extend the lease (where a lessee has an extension option) or not to terminate a lease (where the lessee has a termination option).

This is ultimately a judgement call that needs to take into consideration facts and circumstances specific to the asset being leased, the entity and the wider market. As these factors are wide ranging, we expect this will always be a challenging area in practice.

Enforceability – We discuss how options to extend or terminate the lease must be enforceable to be considered part of the lease term.

Cancellable and renewable leases – IFRS 16 (in paragraph B34) states that a lease is no longer enforceable when both the lessee and the lessor each have the right to terminate the lease without permission from the other party with no more than an insignificant penalty.

Application in specific circumstances –  The application of IFRS 16 to ‘cancellable’ and ‘renewable’ leases also applies to lease contracts that may be referred to using various terms, including ‘month-to-month’, ‘holdover’, ‘rolling’, ‘perpetual’ or ‘evergreen’, if the presences of these create enforceable rights and obligations. The nature of such leases is that there is generally no fixed lease term and the contract continues until one party gives notice to terminate it after a usually short notice period.

Reassessment of lease term – After the commencement of the lease, the lessee must reassess whether it is reasonably certain to exercise an extension option, or not exercise a termination option, if there is either a significant event or change in circumstances that:

We also provide case study examples, as well as the facts and circumstances that may create an economic incentive to exercise or not exercise an option.

We hope you find the information in this article helpful in giving you some detail into aspects of IFRS 16. If you would like to discuss any of the points raised, please speak to your usual Grant Thornton contact or your local member firm. 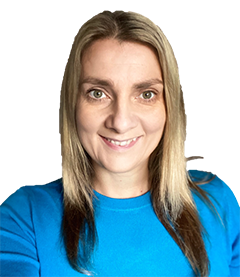