Identifying CGUs is a critical step in the impairment review and can have a significant impact on its results. That said, the identification of CGUs requires judgement.

The identified CGUs may also change due to changes in an entity’s operations and the way it conducts them.

After the entity identifies its CGUs it must determine which assets belong to which CGUs, or groups of CGUs. The basis of allocation differs for:

The below diagram summarises the different allocation bases for assets: 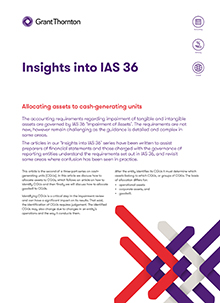 Assets that contribute to the cash flows of a CGU also need to be allocated to that CGU even if it is possible to determine recoverable amount individually (because, for example, an asset’s value in use (VIU) can be estimated as similar to its fair value less costs of disposal (FVLCOD)). This is to ensure a like-for-like comparison when the CGU is tested and its recoverable amount is compared to its carrying value.

The discussion in ‘Insights into IAS 36 – Identifying cash-generating units’ provides guidance on identifying the CGU to which an asset belongs.

In some cases, management may identify certain assets that contribute to the estimated future cash flows of more than one CGU. It would be inappropriate to allocate these assets entirely to a single CGU. Such assets are referred to as ‘corporate assets’ or ‘shared assets’ and may include (for example):

Distinctive characteristics of corporate assets are that they do not generate cash inflows independently of other assets or groups of assets and their carrying amount cannot be fully attributed to the CGU under review.

If there is an indication of impairment for the corporate asset itself, recoverable amount cannot be determined at the individual asset level, unless management has decided to dispose of it (because corporate assets do not generate separate cash inflows).

Corporate assets therefore need to be incorporated into the impairment review at the CGU level – not only to test the asset in question (when necessary), but also to test the CGUs that benefit from those assets. To do so, the entity should:

Where a portion of the carrying amount of a corporate asset cannot be allocated on a reasonable and consistent basis, the assets are incorporated into the impairment review at a higher level and the analysis becomes more complicated. This will be addressed in a later article.

Example 1 -Identification and allocation of corporate assets to CGUs

Entity E has four CGUs: A, B, C and D. The carrying amounts of those units do not include goodwill. During the period, significant adverse changes in the legal environment in which Entity E operates take place. Entity E conducts impairment tests of each of its CGUs in accordance with IAS 36. At the end of the period, the carrying amounts of CGUs A, B, C and D are CU100, CU200, CU300 and CU250, respectively.

IAS 36 provides only limited guidance as to what is meant by ‘allocated on a reasonable and consistent basis’ for allocation of corporate assets to CGUs or groups of CGUs. Judgement is therefore required. This judgement will depend on the nature of the asset and should aim to reflect the extent to which each CGU benefits from the corporate asset. In our view, however, a reasonable and consistent basis of allocation should normally be possible in most circumstances by taking a pragmatic approach, even if the benefits obtained by the CGU are less clear-cut or observable. the example above shows one such pragmatic approach (allocating corporate assets using CGUs’ carrying amounts, weighted by their useful lives) but several other methods could also be supportable (for example, headcount, revenue, floor space or utilisation metrics depending on the circumstances).

Corporate assets and shared corporate costs in the regulatory spotlight

In estimating VIU for a CGU that benefits from a corporate asset, an entity must ensure it also allocates shared corporate costs relating to that corporate asset. A regulatory decision published in the April 2013 European Securities and Markets Authority (ESMA) Report (ESMA/2013/444) highlights this point whereby an issuer did not allocate the costs of corporate officers to the individual CGUs on the basis the cash flows benefited the company as a whole rather than the individual CGUs (highlighting the criterion of independency of cash flows when determining the cash inflows and outflows of a CGU).