In this article we discuss how to identify cash-generating units (CGUs), and in our following articles we cover how to allocate assets to them and also then to allocate goodwill to them.

Identifying CGUs is a critical step in the impairment review and can have a significant impact on its results. That said, the identification of CGUs requires judgement. The identified CGUs may also change due to changes in an entity’s operations and the way it conducts them. 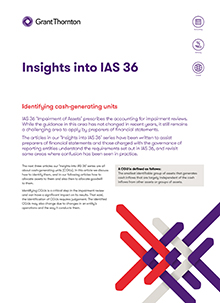 Roles of the cash-generating unit in the impairment review

A CGU serves two primary roles in the impairment review. It facilitates the testing of:

Goodwill and corporate assets by definition do not generate cash inflows on their own and therefore, must be allocated to a CGU or groups of CGUs for impairment testing purposes. The allocation of goodwill and corporate assets is discussed in our articles ‘Insights into IAS 36 – Allocating assets to cash-generating units’ and ‘Insights into IAS 36 – Allocating goodwill to
cash-generating units’.

The objective of identifying CGUs is to identify the smallest identifiable group of assets that generates largely independent cash inflows. CGUs are identified at the lowest level to minimise the possibility that impairments of one asset or group will be masked by a high-performing asset.

To identify a CGU, an entity asks two questions:

Does a group of assets generate independent cash inflows?
Put simply, identifying CGUs involves dividing the entity into clearly identifiable components. Because the CGU definition is based on cash inflows, the division process should focus on an entity’s sources of revenue and how assets are utilised in generating those revenues. Management will need to consider various factors including how it monitors the entity’s operations (such as by product lines, businesses, individual locations, districts or regional areas) or how management makes decisions about continuing or disposing of the entity’s assets and operations.

It may be the case that the design and management of an entity’s operations does not reflect the legal structure of the group. Depending on the circumstances, a CGU might correspond to a legal entity, a division, product line, geographic region, physical location (such as a hotel or retail store) or collection of assets.

The following examples illustrate the identification of the lowest aggregation of assets that generate largely independent cash
inflows in different circumstances.

A bus company provides services under contract with a municipality that requires minimum service on each of five separate routes. Assets devoted to each route and the cash flows from each route can be identified separately. One of the routes operates at a significant loss.

Because the entity does not have the option to curtail any of those bus routes, the lowest level of identifiable cash inflows that are largely independent of the cash inflows from other assets or groups of assets is the cash inflows generated by the five routes together. The CGU is the bus company as a whole.

Entity A owns and operates 10 supermarkets in a major city (City B), each store residing in a different suburb throughout City B. Each supermarket in City B purchases its inventory through Entity A’s purchasing centre. Pricing, marketing, advertising and human resources policies (except for the hiring of each supermarket’s local staff) are decided by Entity A. Entity A also operates 50 other supermarkets in other major cities across the country.

The supermarkets in City B probably have different customer bases as they reside in different suburbs. Accordingly, although operations are managed at a corporate level by Entity A, each supermarket generates cash inflows that are largely independent of those of other supermarkets. Therefore, it is likely each supermarket in City B is a separate CGU.

In making its judgement about whether each supermarket is a separate CGU, Entity A might also consider if:

The IFRS Interpretations Committee (IFRIC) was asked to develop an Interpretation on whether a CGU could combine more than one individual store location. The submitter developed possible considerations including shared infrastructures, marketing and pricing policies, and human resources. The IFRIC noted IAS 36 requires identification of CGUs on the basis of independent cash inflows rather than independent net cash flows and so outflows such as shared infrastructure and marketing costs are not considered. In its March 2007 agenda decision, the IFRIC took the view developing guidance beyond that already given in IAS 36 on whether cash inflows are largely independent would be more in the nature of application guidance and therefore decided not to take this item onto its agenda.

Vertically integrated businesses and an active market for output

This is a common issue for vertically integrated businesses whereby some groups of assets do not generate independent cash inflows, only because each operation’s output is used internally, rather than being sold externally. IAS 36 addresses this issue by clarifying that even if part or all of the output produced by an asset (or a group of assets) is used by other units of the entity, this asset (or group of assets) forms a separate CGU if the entity could sell the output on an active market. An active market is defined in IFRS 13 ‘Fair Value Measurement’ as ‘a market in which transactions for the asset or liability take place with sufficient frequency and volume to provide pricing information on an ongoing basis’. This may be the case for certain commodities such as oil or gold.

Example 3 - Identifying the CGU: active market for the output

In determining the VIU of plants 1, 2 and 3, Entity X will adjust its financial budgets/forecasts to reflect its best estimate of future prices that could be achieved in arm’s length transactions for plant 1’s output while also incorporating future cash outflows used to determine the VIU of other assets impacted by the internal transfer pricing.

Where the cash inflows generated by an asset or CGU are affected by internal transfer pricing, an entity uses management’s best estimate of future prices that could be achieved in an arm’s length transaction in estimating:

When the group of assets does not generate cash inflows that are largely independent and there is no active market for its output (even if used internally), the group is not a CGU. Management then has to combine these assets with others that contribute to the same revenue stream until a CGU is identified.

Changes in identified cash-generating units
Unless a change is justified, CGUs are identified consistently from period to period for the same asset or types of assets. If a change in CGUs is justified (eg an asset belongs to a different CGU than in previous periods or previously recognised CGUs are combined or subdivided), and an impairment loss is recognised or reversed for the CGU, the entity should disclose additional information.

Triggers for a change in CGU structure

IAS 36 does not provide examples of events or circumstances that would justify a change in CGUs. Such a change would generally be appropriate only if there has been a change in the entity’s operations – ie different revenue-generating activities or different utilisation of assets in undertaking those activities. Typical triggers for a change might include:

A change in CGU structure over time

The factors that justify a change in CGU structure sometimes develop over time rather than being driven by a specific event. For example, an entity might gradually change the way it allocates order intake across its production facilities or how it utilises assets to generate a revenue stream. In our view, the change in CGU structure is justified if an asset’s cash inflows become, or cease to be, independent even if this cannot be attributed to a specific event. One practical suggestion for determining the effective date of the change is to consider when management began reviewing or assessing the CGUs differently (eg when management reporting changed).