Inside a partnership approach in India

India is transitioning from an international aid recipient to a donor, but what role do private sector partners play in helping the country forge a new way forward? Vikesh Mehta, Grant Thornton India, shares his views on the dynamic future of India’s economic and social development arena.

India is on the rise, continuing its transition from international aid recipient to donor. The country’s aid spending more than doubled the amount it received from foreign donors in 2014-2015. So much so that last year, the United Kingdom announced “rapid growth and development progress” had made its ongoing aid unnecessary, and it would transition away from direct financial support.

Vikesh Mehta has seen firsthand how India has grown over the past few years (India saw economic growth of 7.5 percent in 2015 — faster than growth in China)1. His team work directly with government partners, donor organisations and the not for profit sector overseeing public-private partnership projects. He firmly believes that private sector partners will play a huge role in India’s future economic and social development, helping the country forge a way forward.

In this Q&A viewpoint, Vikesh shares his team’s experience; the changes they have witnessed, the impact on their role in the sustainable development of Indian Government and the local learning for countries. 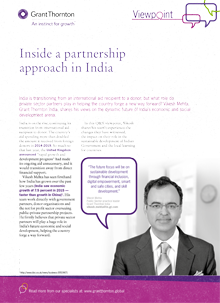