European business optimism is at a record high. This is contributing to a sense of resilience in the face of powerful political forces such as Brexit and EU integration. But the rise of populism is a concern, which businesses cannot ignore when forming business plans for the coming years.

European Union business optimism sits at net 60%.[i] This is the highest figure recorded in 15 years of research. And while confidence is broad-based, the re-emergence of France in recent months is emblematic of Europe more widely.

In May last year, Emmanuel Macron became France’s youngest ever President. Since then, he has taken as an increasingly prominent role on the world stage. Look at his leadership role in publicly criticising the US pulling out of the Paris climate change accord for evidence.[ii]

If Tony Blair represented Europe through his relationship with George W Bush, and Angela Merkel did so with Barack Obama, Macron seems to be doing the same with Donald Trump.

‘The Macron effect’ is rubbing off on French business leaders. Data from our International Business Report (IBR) reveals that at the beginning of 2017 French business optimism languished at net 19%. It has since shot up to a record high of net 75%. Business-friendly policy reforms are also a likely contributing factor to this increase.

Record levels of confidence may come as a surprise. What about Brexit, the continued evolution of the European Union, and the rise of nationalism? Our research shows these issues are on business leaders’ minds. But for the most part, the outlook is one of resilience.

Brexit is a case in point. With less than twelve months to go until the UK leaves the EU, the exact nature of the future Britain-EU relationship remains uncertain. With a transition period likely, even the exact ‘departure’ date is open to questions. But firms are taking it in their stride.

A sizeable proportion of eurozone businesses believe that the membership structure of the EU will change post-Brexit. Nearly half (43%) believe it will lead to a two-tier EU membership model. But only 5% think it will lead to the EU being dissolved. One in four (26%) believe Brexit will have no impact on the EU.

A similar outlook is evident in the UK. Recent research by Grant Thornton UK found that only 22% of British firms identified Brexit strategy as one of their top five barriers to growth. And nearly half (47%) of those who said it was a top five barrier said they could overcome it.[iii]

The impact of Brexit in the eurozone 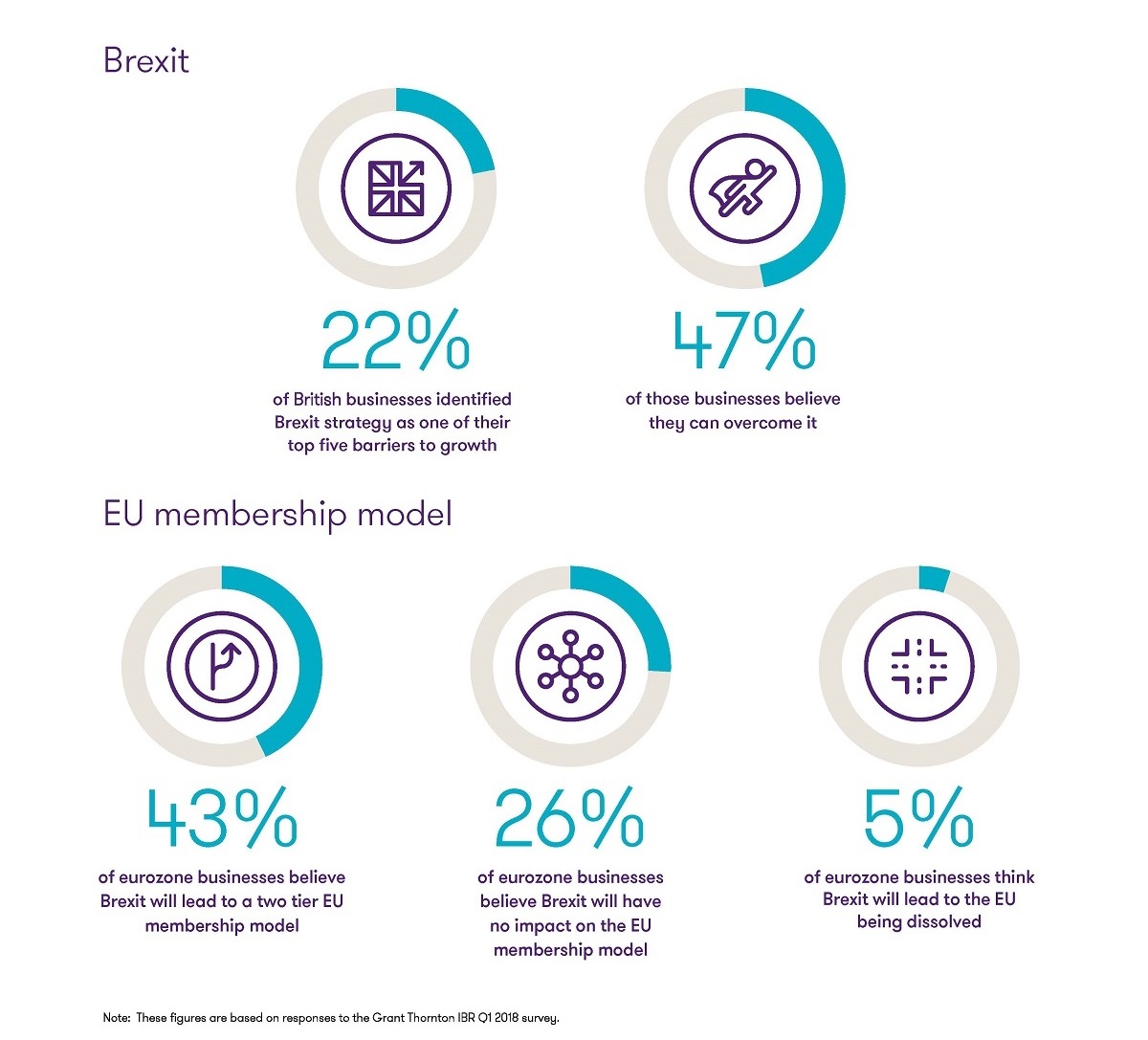 Despite the UK’s imminent departure from the EU, the political powers that be still see integration as critical to the bloc’s future. In May 2018 the European Commission published its draft budget for 2021-27.[iv] It describes the document as 'a budget that unites and does not divide'.

Outside the eurozone, Poland’s overwhelming backing for greater economic EU integration stands out. 82% of firms are in favour.

Poland is emerging as an important and influential member of the European business community. The World Bank expects 4.2% GDP growth in Poland in 2018, driven in part by low unemployment.[v] Poland is seen as geographically important in building transport and trade routes between Eastern and Western Europe. European Structural and Investment Funds totalling nearly 20 billion euros have been allocated to Poland.[vi] One of the main priorities for these funds is to “complete… trans-European transport networks and improve the country’s accessibility.”

Europe’s resilience wavers most when it comes to the potential impact of populism on economic stability. One in five (19%) eurozone businesses cite the rise in popularity of nationalist political parties as the biggest threat to the economic stability of the EU. This thorn in Europe’s side has overtaken low growth rates, which was the most cited threat twelve months ago.

It is not hard to see why businesses are concerned regarding potential uncertainty. In Austria, a centre-right and far-right coalition came into power in 2017. The campaign for Catalan independence has split Spain. And in Poland, the ruling party actively promotes Polish nationalism.

Larissa Keijzer, Executive director GTIL, Regional Head Europe Network Capabilities at Grant Thornton International: “Business fear that nationalist politics will lead to policies which deprioritise cross-border trade and discourage hiring skilled foreign workers. A rise in nationalism can also signify a move towards an insular mindset that is unprepared to engage with the rest of the world.”

European businesses are united and resilient. However, nationalism looks set to remain a force in European politics. Likewise, Brexit will reshape the continent politically and legally. Therefore, businesses will need flexibility in their planning to accommodate for a range of scenarios in the coming years.

No firm wants to find itself losing market share, or market access, because it underestimated the impact of Brexit or a change in government policy. Establishing or growing a presence in markets outside Europe may be a sensible strategy for firms looking to mitigate potential risks from future instability closer to home.

Europe – a region in resurgence

Nordic collaboration the foundation for success