The hospitality and tourism industry is hotwired into the global economy; how businesses in the sector prepare for and respond to economic shocks is critical to long-term growth prospects

Business leaders in the hospitality and tourism industry could be forgiven for shooting jealous glances over the fence at their neighbours in the retail sector from time to time. The hospitality industry remains sensitive to global events in a way its consumer-facing cousins in retail simply are not. Leisure travel and tourism remain luxury items and lower disposable incomes mean tough choices have to be made between non-essential purchase options. Businesses also cut discretionary spending on travel and conferences when constrained.

The challenge for hospitality and tourism businesses is that the global recession caused many consumers to stop going out to eat and drink. Instead, they choose to do so at home. Many also scaled back on foreign travel in favour of domestic adventures: household and much of business travel remain 'big ticket', discretionary purchases which are more closely scrutinised. During a slow, uneven recovery these trends have not fully reversed.

But following a sharp drop in business growth indicators in Q1 according to our International Business Report (IBR), which tracks business sentiment in 35 economies across the globe, hospitality and tourism confidence picked back up in Q2. The question is: why? 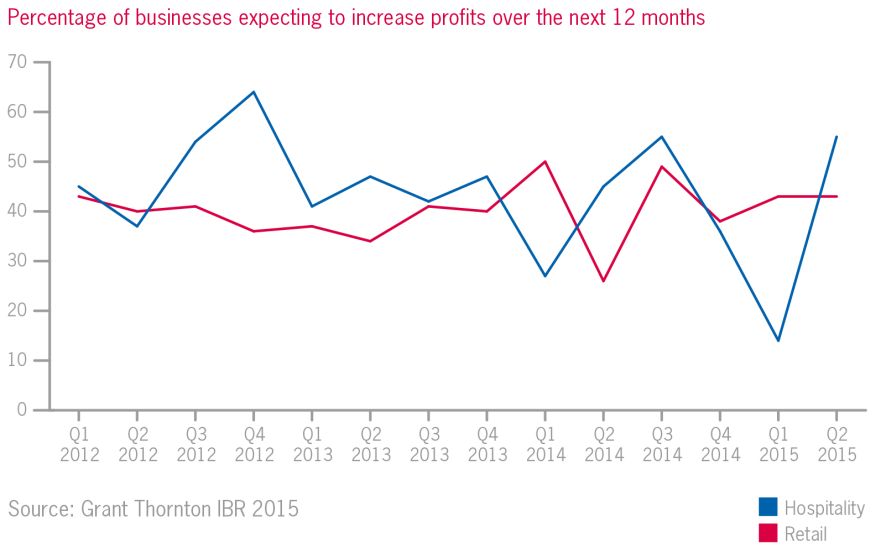 First I should point out that the interviews were conducted in May, before the second and most barbaric terrorist attack in Tunisia. The country had previously been something of a haven of tranquillity in an otherwise volatile region but the regional tourism industry will undoubtedly suffer. And this could in turn hit global confidence as consumers think twice about visiting areas bordering conflict zones – which seem, if anything, to be on the up.

On a more positive note, the strong US dollar makes it cheaper for high-spending US tourists to travel. Estimates by Oxford Economics suggest that every 10% currency depreciation against the dollar – the amount for example that the Turkish lira has lost against the greenback since the start of the year – increases global tourist arrivals by 0.6%. Weak currencies at destinations often foster higher levels of spending on entertainment and activities, shopping and more expensive food and beverage.

Moreover, the falling oil price has helped lower air fares slightly, confounding analysts who thought it had already bottomed out. Although the International Air Transport Association has predicted a decline of just 5.1% in 2015 in airfares, around a tenth of the drop airlines have seen in the cost of jet fuel. Although if the oil price remains low, consumers might benefit from lower fares.

To hedge or not to hedge

Volatility in the industry undoubtedly brings both challenges and opportunities. For example, those airlines which have decided to stop hedging fuel costs – such as American Airlines – are benefitting from a massive windfall. Of course, if the price had gone the other way then they might be in serious trouble, but this was a brave business decision that paid off. Meanwhile, if the Federal Reserve raises US interest rates it will push the dollar even higher. This is bad news for US hospitality businesses, but a boon for other countries which attract US tourists.

Hospitality business leaders should try to insulate themselves as far as possible against economic shocks. But in this fast-moving, digital age this is easier said than done. The winners will be those who ride out the bad times through robust diversification and long-term planning. Because when the good times come, it may well be the turn of retailers to look enviously over the garden fence.