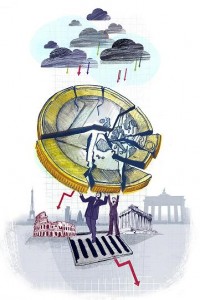 The United Kingdom Prime Minister, David Cameron, today set out a path by which the country could leave the European Union by 2017.

With the eurozone in a recession that is now forecast to last throughout 2013, he said holding a referendum immediately would offer the British people a “false choice” when Europe was going through a time of such fundamental change. Instead he proposed reform and renegotiating the membership Treaty, promising to campaign to stay in the EU with all his “heart and soul”.

The speech caused a stir across the English Channel. The French and German foreign ministers suggested that the UK would not be able to ‘cherry pick’ what elements of membership it wanted, with the former telling British businesses that France would “roll out the red carpet” for them should their country leave the EU.

Perhaps the key figure in the upcoming debate, Angela Merkel, said she would listen to British wishes but warned that any deal would have to be a fair compromise. There was support for Mr. Cameron in the Netherlands, where he was praised for “framing the debate sharply”, but Sweden, another free-market ally, was more circumspect, its foreign minister saying too much flexibility would lead to a European “mess”.

Business leaders seem equally divided. Some larger business chiefs are worried that the uncertainty over the referendum risks complicating longer term decisions, making the UK a less attractive place to do business. However, he received backing from the Confederation of British Industry, whilst a survey of smaller businesses found that almost half backed renegotiation, although only 12% wanted to leave.

Of course, the UK Conservative party may not win the next general election but the speech opens a new chapter in the history of the EU. No state has ever left. Indeed no state has ever held a referendum on leaving, although in 1975 the UK held a referendum on withdrawal from the EU’s predecessor – the European Economic Community (the EEC). 67.2% of voters chose to stay in.

Polls suggest it would be a lot closer this time around.