As of 1 January 2018, amendments to the Law On Taxes and Duties came into force. With said amendments, Latvia has introduced the Organisation for Economic Co-operation and Development (OECD) format of the transfer pricing documentation (TPD), consisting of a Master File and a Local File.

Article 4 of the CIT Law determines cases when the taxable income should be adjusted if related party transactions are not arm’s length. Whereas Article 15.2 of the Law on Taxes and Duties defines when full TPD should be prepared in order to justify the prices applied in transactions.

In accordance with the regulations mentioned, transactions of Latvian companies with the following entities should be arm’s length:

Latvia has been a member country of the OECD since 1 July 2016.

Regulation No. 667 specify that OECD TP Guidelines might be used for the needs of TP analysis as long as it does not contradict the local TP legislative acts. In most cases, the State Revenue Service (the SRS) accepts the principles stipulated in the OECD TP Guidelines regarding the structure of the TPD.

The principle of supremacy of laws does not provide the application of the OECD TP Guidelines directly. However. The SRS is following the recommendations of the Council of the OECD (C(95)126/Final), which was a base in the drafting of current legislation.

Regulation No. 667 prescribe five methods for determining an appropriate transfer price between related companies and specify that OECD TP Guidelines might be used for the needs of TP analysis. As such, the following methods can be used:

There is no hierarchy between the available TP methods in Latvian legislation and the applicability (for both international and domestic transactions) is present. Domestic legislation indicates that the most appropriate method should be used. However, in practice, traditional transaction methods are favoured by the SRS, with CUP method being the most favoured.

Notwithstanding to the fact that local legislation directly does not allow to use unspecified methods, in practice valuation techniques/methods, eg discounted cash-flow based methods, may be used in cases when intangibles are transferred.

Local legislation does not mandate the use of more than one TP method to test the arm’s length nature of a specific controlled transaction.

There is no specific TP declaration in Latvia. However, the total volume of related party transactions (aggregated volume of services received/provided to related parties and goods sold/bought from related parties) for a given year needs to be disclosed in the CIT return for the specific year (Row 6.5.1. of CIT return).

Additionally, in case of a TP audit, tax authorities would usually inquire about (i) description and quantification of the transaction cost base for each transaction (including information on full cost (direct costs and overheads) base using actual costs in the specific year); (ii) availability of agreements with related parties; (iii) analysis that determines the arm’s length price for a given transaction.

As stated above, as of 1 January 2018 came into force amendments to the Law On Taxes and Duties. With said amendments, Latvia has introduced the OECD format of the TPD, consisting of a Master File and a Local File (see graph below).

Compulsory annual preparation of Master File and Local File within 12 months after the end of the specific fiscal year, and submission within 1 month upon a request from the Latvian tax authority, if:

Obligatory annual submission of Master File and Local File to the Latvian tax authority within 12 months after the end of the specific fiscal year, if: 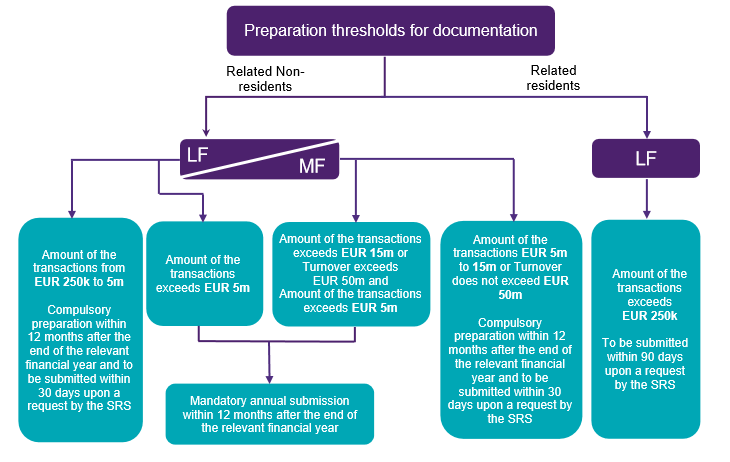 Article 8, Paragraph 4 of the Official Language Law states that statistical summaries, annual accounts, accounting documents and other documents which are to be submitted to State or local government institutions on the basis of laws or other regulatory enactments, shall be drawn up in the official language. As such, generally all TP related documents need to be submitted to the tax authority in Latvian language. However, the Master File can be submitted in English language.

Notwithstanding to the above, in practice, all TP related documents can be submitted to the tax authority in English language, and tax authorities tend to review TPD in English. However, if the SRS has a feeling that the taxpayer will challenge its findings in a court, the tax authority will ask for all relevant documents to be translated into Latvian language, as courts would only look at documents in Latvia. Generally, 30 days are given for translation of all relevant TP documents into Latvian language.

Following the activities carried out by the OECD within the base erosion and profit shifting (BEPS) project, and the updated OECD TP Guidelines, there have been major changes with respect to the TP documentation preparation / content in Latvian legislation, the most significant of which is the introduction of the three tier approach for TP documentation, which consists of the following:

As per the content of TPD, Latvia follows the standard Master File and Local File content requirements per OECD, with a small addition that the taxpayer should provide screenshots with fixed date and downloads from databases with fixed dates for acceptation or rejection reasons of comparables.

Regulation No. 677 prescribes five methods for determining an appropriate transfer price between related companies and provides guidelines for preparing a functional analysis and benchmarking study. Furthermore, Regulation No. 677 specifies that OECD TP Guidelines might be used for the needs of TP analysis.

Some risk factors for challenge

Another aspect that could be of the SRS interest:

According to Article 23, Paragraph 1.1 of the Law on Taxes and Duties, the SRS has the right to assess whether controlled transaction pricing was arm’s length within five years after the tax becomes due. As such, the relevant records need to be kept for at least five years following the submission deadline of the CIT return for the specific period.

A penalty for non-compliance with TP legislation requirements of up to 1% (but not exceeding EUR 100,000) from the controlled transaction amount for which the documentation had to be prepared has been introduced into local legislation as of 1 January 2018. The penalty will apply in situations when the taxpayer does not comply with either the submission deadline or the content requirements due to which it becomes impossible to make sure that the arm’s length principle is followed.

For transactions carried out until 31 December 2017, there is no specific penalty for not having TPD. When the prices applied in transactions between related parties are not arm’s length, the taxable income of the taxpayer may be adjusted upward, and the of 20% - 30% and the late payment penalty (annual rate of 18.25%) on the additionally payable CIT may be applied. For recurring TP adjustments, the penalty rates are doubled (ie 40% - 60%).

Economic analysis and how to demonstrate an arm’s length result

Latvian law requires related-party transactions to be at arm’s length. In other words, the conditions made or imposed between two related enterprises in their commercial or financial relations must not differ from those that would be agreed upon between independent enterprises engaging in similar transactions under similar circumstances.

Both single-year and multi-year analysis are acceptable, the choice of using one of them should be justified. In case when the relevant fact pattern and the conditions of the controlled transactions have remained unchanged, a new benchmarking study has to be prepared once in three years and financials of comparables have to be updated each year for consecutive two years after a new benchmarking study is performed. As stated before, the taxpayer should provide screenshots with fixed date and downloads from databases with fixed dates for acceptance or rejection reasons of comparables.

APAs are regulated by Article 16.1 of the Law on Taxes and Duties and Regulations No. 802.

An APA can be requested by the taxpayer if the yearly volume of controlled transactions for which an APA will be concluded exceeds (or is planned to exceed) EUR 1.43 million, and a state duty of EUR 7,114 will need to be paid by the taxpayer.

APAs can be concluded for a period of up to 5 years (Clause 5.5 of Regulation No. 802), and a rollback of up to 5 previous years is also possible (Clause 5.6 of Regulation No. 802). In case the APA roll back option is chosen by the taxpayer, still the total period of 5 years for an APA cannot be exceeded (e.g. the taxpayer may ask that the APA covers the 2 previous years and 3 following years).

Latvia can only initiate unilateral APAs; however, if a tax authority from a different jurisdiction initiates a bilateral or multilateral APA, Latvian tax authorities would participate in said APA.

It takes a maximum of 14 months to conclude an APA; however, tax authorities have taken it upon themselves to shorten this period to around 6 months.

There are no TP related exemptions for SMEs. However, according to Article 15.2 of the Law on Taxes and Duties, related party transactions with a volume of less than EUR 20,000 per annum can be excluded from the TPD.

Local government has announced and shows intentions to implement digital service tax (DST) as Latvian government commissioned a study to determine the increase of tax revenue based on the assumption that the country levies a 3% DST.

Additionally, during the last two years, the concept of 'Consult Before' has been introduced by the Latvian tax authorities. This concept entails that in case that tax authorities have identified particular risks related to controlled transaction pricing for a specific taxpayer, instead of initiating a formal audit procedure, they will reach out to said taxpayer with questions on the applied pricing, and provide their guidance/recommendations on how to bring the pricing of controlled transactions in line with the arm’s length principle.

If following this process (dialog) the tax authorities and taxpayer can come to an agreement, no audit is initiated, and the taxpayer is not fined. However, if during this procedure an agreement is not reached, a formal audit shall be initiated.

Given the recent OECD publication on financial transaction pricing, Latvian tax authorities are becoming more interested in controlled financing transactions carried out between a Latvian company and a foreign-related company. Especially if the volume of said transactions is rather high.

The economic fallout of COVID-19 is likely to have widespread impact and an increase in TP and CIT enquiries globally is expected. All MNEs should be reviewing their potential exposure to TP enquiries and updating documentation accordingly.

Entities should (i) identify where the key business impacts affect their TP policy; (ii) think strategically how crisis responses can be supported by the TP function; and (iii) start with internal document by adjusting agreements, and include robust and contemporaneous audit files to support TP policy amendments.

The TP concept assesses the business as a whole rather than individual figures, and also takes into account market conditions, macroeconomic developments and their impact on the company's financial performance. Therefore, for companies for which the issue of TP is relevant, it is recommended to gather and document the objective evidence that affected their performance and that could help to justify the compliance of the prices of controlled transactions with the market level.

For further information on transfer pricing in Latvia please contact:

Tax insights
Adjusting for the shock
Six tips for transfer pricing in 2020
Read more
Also appears under...
Sign in with LinkedIn Close