The global economic cycle has peaked and businesses face a more downbeat outlook in 2019. With risks increasing, how can businesses continue to achieve growth and thrive in the year ahead?

Among the 5,000 mid-market business leaders Grant Thornton interviewed as part of the IBR’s global economic outlook, global optimism sits at net 39%, a fall of 15 percentage points (pp) from net 54% in Q2 2018. This is the weakest optimism score seen since Q4 2016.

Economic uncertainty is identified by business leaders as the biggest risk, peaking at 50%, a rise of 22pp from Q2 2018. This rise can be partly attributed to geopolitical tensions such as the US/China trade war and the upsurge of populist sentiment in many major western economies such as Italy and Spain.

However, it’s not all bad news and despite the spike in uncertainty, over 60% of respondents were either optimistic or very optimistic about the future. This is reflected in export expectations with only 11% expecting a decrease and 84% of leaders expecting revenues to either stay the same or increase. Of the companies in Vietnam participating in the survey, 62% were more optimistic about growth prospects for this year 5% higher than the average for APAC.

Economic uncertainty according to IBR data (2013-18) 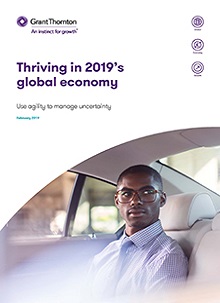