Against a backdrop of rising inflation, a talent war, political upheaval and economic contraction, the mid-market is maintaining optimism over export growth. But is that optimism justified, and what can mid-market businesses do to weather rising economic uncertainty?

Appetite for international expansion remains strong within the mid-market

Inflation is still rising. Mitigating its impact is central to international success

Business leaders could be forgiven for taking a cautious approach to international trade. Ongoing conflicts, including Russia’s invasion of Ukraine, have resulted in growing international sanctions and redrawn political alliances leading to reshaped trade routes. Combined with the differing degrees to which various regions are (or are not) overcoming the pandemic, this makes a ‘wait and see’ approach look like good business sense.

These fundamental shifts in the global landscape are contributing to rising economic uncertainty with Grant Thornton’s latest International Business Report (IBR) showing that 63% of respondents cite economic uncertainty as a major constraint to growth, closely followed by energy costs (62%) and labour costs (57%). The IBR, which spans 28 countries and has monitored mid-market business opinion for over a decade, also shows that with historically high inflation and recession anticipated in many countries, these businesses around the world are rapidly reassessing their expansion plans. 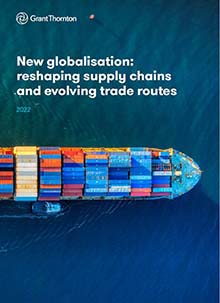 Trend one: Appetite for international expansion remains strong within the mid-market

Despite the uncertainty, the IBR shows export expectations remain near record highs, with nearly half (44%) of respondents anticipating increases in the next 12 months globally. Likewise, 42% expect to increase both their international revenue and the number of countries they sell to.

”Whether the drive to expand into new markets is by design or out of necessity due to geopolitical factors beyond their control, international expansion for the mid-market has definitely shifted a gear as companies continue to seek new sources of revenue.” says Peter Bodin, global CEO at Grant Thornton International Ltd. “But building a sustainable long-term strategy requires a clear understanding of the different dynamics in each market. Those dynamics might be the regulatory environment, a different business culture, or how to access funding to launch in a new market, but businesses need to make sure they understand the whole picture and how best to execute their plans, despite the current challenges.”

One challenge is the volatility in foreign exchange markets, which impacts supply chain costs and then profits when trading in weakening currencies. When countries increase interest rates to manage inflation, foreign currency pours in, and exchange rates rocket.

Glória de Lucena Ribeiro, partner and IBC director at Grant Thornton Brazil, says. “In Brazil, it’s a favourable time for exports, because the dollar is overvalued compared to our national currency, but for importers, this is a challenge. Businesses must try to find cheaper partners or local suppliers to help increase prices without reducing quality.”

IBR data reveals that 58% of mid-market businesses globally expect to increase revenues over the next 12 months with exports playing a key role – as noted above.

Businesses are also channelling more resource to international expansion, with 73% intending to increase or continue with the ratio of employees focused on international markets. But that buoyant view may yet change. Much like in the pandemic, a new form of globalisation is still emerging and businesses will have to continue to map it, understand it and learn how best to manage it.

Although business leaders anticipate increased international activity, the mid-market isn’t expecting business as usual. Our IBR data shows many markets are shifting from their traditional trade routes, for several reasons.

We see Sweden leaning towards trade with EU compatriot Germany, having previously prioritised the US. Meanwhile, Japan is choosing the US and south-east Asia over China, ranking political affiliation over proximity. Australia is cooling off on New Zealand as its immediate growth priority to create bonds with Canada, strengthening its G20 and NATO connections.

“Japanese companies, for example, are relocating manufacturing from China to South East Asia where cost is still relatively competitive compared to local prices in Japan. Maybe not as low as China, but there’s a lot more security and confidence in the supply chain operating in those jurisdictions,” observes Scott Farber, network capabilities team regional head for the Americas, Grant Thornton International Ltd.

Supply chains are also reshaping, as new deals are struck along political lines, and companies prioritise contracting with known, trusted suppliers. This new version of globalisation places greater value on political certainty. As a result, companies are reducing risk in their supply chains. There is also scope to improve resilience, flexibility and sustainability of supply chains by setting up more local manufacturing hubs.

“At a global macro level, we are seeing businesses valuing resilience far more highly than they used to. They’re ‘friendshoring’; going to sympathetic countries that are more palatable to stakeholders,” says Oliver W Bridge, head of operational consulting at Grant Thornton UK.

However, international alliances still need to make commercial sense, and not all businesses have the luxury of changing where they can afford to go for the materials, products, services and sales they need.

“It differs by sector. Aviation, automotive and other large production and asset intensive sites have a bigger challenge to localise than some other sectors, such as healthcare,” says Monique Pisters, tax partner and IBC director at Grant Thornton Netherlands.

In Brazil, Glória is still seeing optimism among clients considering new international relationships. As well as the traditional markets of the US, China and Argentina, Brazil is looking to Europe to trade. “Germany and the Netherlands are important countries for Brazil’s import and export”, she says.

Our IBR data suggests that regions are responding differently, depending on local political, social and economic views. This creates a more nuanced picture of broader global trends.

In Latin America, inflationary pressures are hitting hard. “Inflation in Brazil is high, at around 12% in the last 12 months. In Argentina, it’s around 6% monthly. Chile has very high inflation right now. Prices are increasing and salaries cannot keep up,” reports Glória. “Companies are seeing a reduction in margins. They are fighting to be competitive, but it’s very challenging. It’s hard to navigate in a world with such high inflation rates. It’s also very expensive to get money in terms of bank loans.”

In the EU, there’s more caution. “I see some moderate optimism, but mostly people feel we will be facing economically tougher times in the coming period, with a mild recession in late 2022 and early 2023,” says Monique. “People and businesses face high inflation that will most likely suppress domestic and foreign investment.”

North America appears largely insulated from the politically driven challenges facing the EU, although this may change if more trade sanctions are imposed.

“I can’t recall a time where there’s been so many different, variable factors in play. We’re just coming out of Covid, then you have the Russia-Ukraine conflict, which really drove up energy prices, and we’ve had the great resignation, causing a strain on employment. There’s a lot of different pressures, most recently inflation and interest rates,” says Luciano Centanni, audit partner and IBC director at Grant Thornton LLP in the US.

Since the last time we conducted this research, the real effects of inflation have taken hold, with businesses seeking to mitigate rising costs. More than half (53%) of International Business Report respondents predict an increase in their selling prices over the coming months. “Many of my clients have been able to pass costs for both labour and materials on to customers by raising prices, because the demand has still been strong, but at some point, the demand might weaken,” warns Luciano “Companies need to brace themselves for that.”

While we have seen a sharp spike in concerns about energy costs recently (see below), inflation will eventually fall, and businesses that act intelligently through the intervening period will be well placed to take advantage when prices normalise.

“In building resilience, there are lessons that can be drawn from how businesses responded to Covid-19,” says Dave Munton, global head, international business support for Grant Thornton International Ltd. “It’s about scenario planning, doing the basics well, building resilience and not taking too many risks. Businesses need to do less, better.”

For advice on countering the impacts of inflation, take a look at the Grant Thornton inflation action plan.

For bespoke advice and support on preparing for, and thriving through, ongoing economic uncertainty, speak to you local Grant Thornton member firm.