So what does the multilateral instrument really mean for your business? And with many of the updated treaty provisions set to come into force over the next 18 months, how can you make sure you’re ready for the changes ahead?

The signing of the Organisation for Economic Co-operation and Development’s (OECD’s) MLI in June was a significant achievement in the implementation of the Base Erosion and Profit Shifting (BEPS) Action Plan. At the stroke of a pen, some 1,100 bilateral tax treaties were modified to reflect key elements of the BEPS Action Plan.

What is the BEPS multilateral instrument (MLI)?

When the finalised Action Plan launched in 2015, most observers’ list of potential obstacles to BEPS implementation would have included how to modify all the countless bilateral tax treaties worldwide.

The MLI provides a quick and easy way to amend bilateral treaties without the need to negotiate protocols with each individual country. In essence, each party sets out what aspects of BEPS it’s prepared to accept within its tax treaties and then this is matched up with other signatories.

A spider’s web of tax arrangements

Different national agendas are in operation as the aspects of BEPS that each of the 68 signatories have agreed vary quite markedly. Many haven’t signed up at all, notably the United States. The result is a spider’s web of tax arrangements worldwide, which can only add to the complexity and uncertainty within the international tax landscape.

Click on the below map for a more detailed view of the MLI and mandatory arbitration signatory countries. 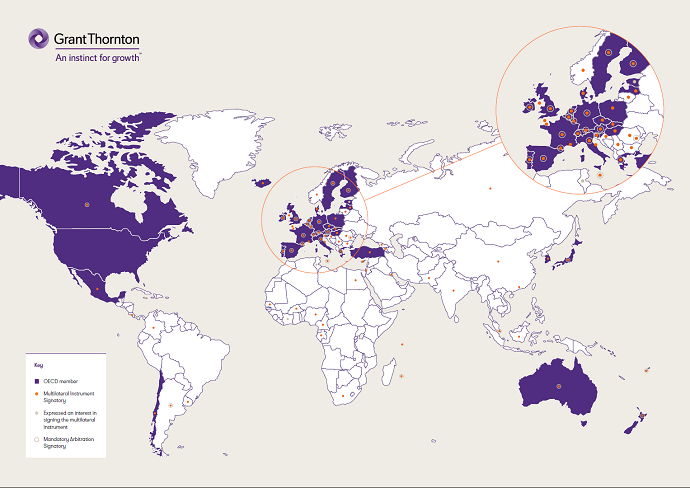 The signing of the MLI by so many countries and the resulting acceleration of BEPS implementation underlines the political momentum behind the Action Plan, as well as the skill and determination of the OECD in making it a reality. The OECD has proved the doubters wrong and BEPS is now an unavoidable fact of life.

The MLI will require your business to look at bilateral treaties through a new lens. You need to evaluate the implications now to allow sufficient time to adapt tax strategies and operations. Read the full article on BEPS multilateral instrument [ 153 kb ] for more implications and actions for your business.

If you would like to discuss any of the areas raised in this article, please contact your local Grant Thornton adviser or one of the contacts listed.