IAS 36 - Overview of the Standard

Identifying CGUs is a critical step in the impairment review and can have a significant impact on its results. That said, the identification of CGUs requires judgement. The identified CGUs may also change due to changes in an entity’s operations and the way it conducts them.

After the entity identifies its CGUs, it must determine which assets belong to which CGUs, or groups of CGUs. The basis of allocation differs for: 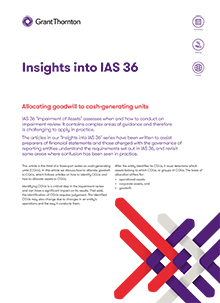 The below diagram summarises the different allocation bases for goodwill:

It is not possible to determine the recoverable amount of goodwill independently from other assets because goodwill does not generate cash flows of its own; rather it contributes to the cash flows of individual CGUs or multiple CGUs.

Entity A acquires competitor E for CU1M and determines that this new acquiree is a single CGU (E). Entity A performs an analysis of its existing business and determines that CGUs B, C and D will all benefit from the acquisition of E and expect to realise potential synergies from the transaction. The identifiable net assets of E total CU750,000. Total goodwill from the acquisition equals CU250,000 (CU1M – CU750,000).

Ignoring tax effects, because some of Entity A’s existing CGUs are expected to benefit from the synergies of the combination, a portion of the goodwill of CU250,000 should be allocated to these CGUs. IAS 36 provides little guidance on how to do this.

However, if Entity A is able to estimate how much of the purchase price (and goodwill) relates to expected synergy benefits for its existing business, this can provide an initial basis for allocation. For example, if the estimated fair value of E is CU800,000 (ie excluding acquirer synergies), Entity A may allocate CU50,000 of goodwill to E (CU800,000-CU750,000) and allocate the remaining goodwill of CU200,000 between CGUs B, C and D, representing the expected synergies to be generated between E, B, C and D.

Allocating goodwill to groups of CGUs

IAS 36 acknowledges that sometimes goodwill cannot be allocated to individual CGUs on a non-arbitrary basis. It therefore allows or requires allocation to groups or clusters of CGUs, subject to the limits noted above.

If management has a monitoring process for goodwill, IAS 36 seems to require goodwill to be allocated to the lowest level at which it is monitored but limits this to the size of the operating segment before any aggregation. Allocation at such a level means goodwill can be monitored using existing reporting systems consistent with the way management monitors its operations.

If there is no separate monitoring process for goodwill, IAS 36 allows a choice of allocation to:

In our experience, the first condition rarely has a practical effect because few entities separately monitor goodwill outside the impairment review and external financial reporting process. The impact of the second condition is more varied. In some entities, an operating segment may comprise many CGUs while in others, the CGUs and operating segments might be similar or even identical. IAS 36 does not seem to envisage an operating segment could be smaller than a CGU – in our view, this is possible in theory but rare in practice.

The basis of allocation
The basis of allocation (the expected synergies from the combination) requires considerable judgement in practice. One approach is to perform a ‘pre-combination’ and ‘post-combination’ valuation and use this analysis as a basis to allocate the goodwill. Such an analysis may identify the factors that contribute to the synergies expected to arise from the acquisition (eg cost savings from economies of scale and reduced overheads or increased revenues from crossselling opportunities to new markets). Others may use the relative carrying values of the CGUs to allocate the goodwill to impacted CGUs.

In our view, the entity should take a practical approach while aiming to arrive at the most representative allocation of goodwill to those CGUs that are expected to benefit from the combination. If the requirements in IAS 36 are overlooked, and goodwill is allocated entirely to the acquired business, this can sometimes lead to unnecessary future impairment losses and complications (eg when the CGUs are subsequently reorganised or disposed of).

Management has identified several CGUs, each of which is a component of one of entities A, B, C and D. The operating segments before aggregation for the purposes of IFRS 8 are Entities A, B, C and D as management reporting and resource allocation decisions are based on the corporate structure. Goodwill is not separately monitored.

Changes in the allocation of goodwill

For various reasons, the initial allocation of goodwill to CGUs or groups of CGUs may change. Below we discuss these circumstances and outline the appropriate accounting for each in accordance with IAS 36.

IFRS 3 ‘Business Combinations’ sets out guidance on provisional accounting for a business combination, including a requirement to finalise the IFRS 3 accounting within the ‘measurement period’. This period ends as soon as the required information is received about facts and circumstances that existed at the acquisition date or learns more information is not available. However, it should not exceed twelve months from the acquisition date. In our view, if goodwill has been determined only provisionally in accordance with IFRS 3, then that provisional amount should be allocated to CGUs or groups of CGUs if possible (and then adjusted as necessary when the IFRS 3 accounting is complete). However, IAS 36 acknowledges an initial allocation may not be possible, in which case the initial allocation should be completed before the end of the first annual period following the combination. For more on IFRS 3 accounting and the provisional accounting for goodwill, please see our Insights into IFRS 3 series.

In the event the entity is unable to allocate even the provisional amount of goodwill before the end of the period in which the combination takes place, it should disclose:

Entity P has acquired a subsidiary (Entity T) on 30 June 20X0 which will be accounted for in accordance with IFRS 3. At the reporting date of 31 December 20X0, Entity P has not completed its determination of the acquisition date fair values and therefore it cannot finalise its measurement of goodwill (ie the IFRS 3 measurement period remains open and the amounts reflected in the consolidated financial statements are stated as provisional). Entity P also concludes it cannot complete the initial allocation of the provisional goodwill by 31 December 20X0.

Does Entity P have to carry out an impairment test on the goodwill prior to 31 December 20X0 in accordance with IAS 36?

Ignoring tax effects, when the initial allocation of goodwill has not been made but facts and circumstances indicate the goodwill may be impaired (eg an overpayment for the acquisition), Entity P should use reasonable endeavours to ensure the goodwill is not carried at an amount above its recoverable amount. This will ensure compliance with the overall principles of IAS 36 which require some form of recoverability test to take place.

The fact the allocation process remains incomplete does not exempt the entity from performing an impairment assessment using the best information available at the time. Depending upon the particular facts and circumstances, the form of this test may vary (for example, the entity may need to estimate the recoverable amount on an entity-wide basis).

a. Disposal of an operation within a CGU to which goodwill has been allocated

When goodwill has been allocated to a CGU and the entity disposes of an operation within that unit, the goodwill associated with the disposed operation must be:

Example 5 - Reorganisation of the reporting structure

Goodwill had previously been allocated to CGU A. The goodwill allocated to CGU A cannot be identified or associated with a lower-level asset group, except arbitrarily. CGU A is to be divided and integrated into three other CGUs: B, C and D.

Other methods that may better reflect the goodwill associated with the operation disposed of or reorganised
When an entity disposes of part of a CGU to which goodwill has been allocated, IAS 36 sets out a benchmark ‘relative value’ approach for re-apportioning the goodwill within that unit, while also permitting some flexibility. Similar guidance applies when an entity reorganises its reporting structure – if the reorganisation changes the composition of one or more CGUs to which goodwill has been allocated, the goodwill needs to be reallocated to the affected units.