IAS 36’s step by step impairment approach is explained and set out in full in our article ‘Insights into IAS 36 – Overview of the Standard’. However to give some context over how the next three articles fit into this approach, here is a reminder of steps 4 to 6 (the ‘How’ part of the process). 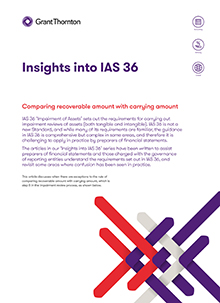 Although making this comparison may appear straightforward, practical issues arise in relation to:

When assets are grouped for recoverability assessments, it is important to include in the CGU all assets that generate or are used to generate the relevant cash inflows. If assets are omitted inappropriately, the CGU may appear to be fully recoverable when an impairment loss has in fact occurred. The overarching objective is that the CGU’s carrying amount is determined consistently with its recoverable amount.

Certain exceptions to this general rule apply and are discussed in more detail below.

It may be necessary to consider some recognised liabilities to determine the recoverable amount of a CGU. This may be the case when the disposal of the CGU would require the buyer to assume the liability. As such, the fair value less cost of disposal (FVLCOD) of the CGU might be estimated using pricing information that takes account of the liability that buyers would assume. To perform a meaningful comparison between the carrying amount of the CGU and its recoverable amount, the liability is also deducted from the CGU’s carrying amount and the cash flows from settling the liability are included in the value in use (VIU) calculation. The example below illustrates this point.

Practical insight – Including liabilities that relate to the CGU

The key reason to include some liabilities in a CGU is the market-based transaction price on which fair value is based necessarily includes the transfer of any liabilities that are inseparable from the asset. If the impairment test is based solely on VIU (eg because FVLCOD cannot be measured reliably) it may not be necessary to include inseparable liabilities and the related cash flows to achieve a meaningful and like-for-like comparison. In any case, including or excluding the liability (and related cash outflows) will often make little or no practical difference (eg if the liability is short-term or if it is discounted using a similar rate to that used for estimating VIU).

Sometimes, for practical reasons, the recoverable amount of a CGU is determined after consideration of assets that are not part of the CGU (for example, receivables or other financial assets) or liabilities that have been recognised (for example, payables, pensions and other provisions). In such cases the carrying amount of the CGU is:

The carrying amount of a liability may not be the present value of its future cash outflows or may not be discounted using the same rate as for estimating VIU. One such example is a pension obligation which might be discounted using a high quality corporate bond rate. If an entity includes the pension contributions in its cash flows for VIU purposes, it will need to consider if some portion of those contributions relates to past services and is therefore a settlement of part of the pension liability. Achieving a like-for-like comparison is potentially a complex exercise. However, it is not possible to simply ignore the costs of providing pensions and other employee benefits when estimating VIU and a pragmatic approach (such as including future service costs rather than contributions, and excluding the liability) might need to be taken.

A situation frequently met in practice is the case of ‘rent-free’ periods not arising as a consequence of the COVID-19 pandemic, whereby a lessee recognises a liability and expense during the period of time in which no cash payment is due to the lessor as a result of straight-lining the lease payments over the lease term. A question arises as to whether the lessee should include this liability as part of the carrying amount of the CGU being tested for impairment if the estimates of future cash flows include 100% of the future lease payments (therefore including those that effectively settle the liability).

As discussed in our article ‘Insights into IAS 36 – Value in use: estimating future cash inflows and outflows’, in estimating VIU, an entity will incorporate the future cash inflows and outflows from continuing to use the group of assets and from its ultimate disposal; however, estimates of future cash flows would not include cash outflows for settling liabilities that have already been recognised unless the associated liability is included as part of the CGU being tested for impairment. In the case of a rent-free period, comparing like-for-like could be achieved either by:

The order of impairment testing for corporate assets and goodwill

IAS 36 specifies the order of testing in three circumstances:

The assessment becomes more complex where a portion of the carrying amount of a corporate asset cannot be allocated on a reasonable and consistent basis to an individual CGU being tested. In this case, the entity should:

The example below depicts the order of testing where the corporate asset cannot be allocated on a reasonable and consistent
basis, other than on an entity-wide level.

Order of testing for assets and cash generating units to which goodwill has been allocated
If certain assets forming part of a CGU to which goodwill has been allocated are tested for impairment at the same time as the CGU, these assets are tested before the CGU as a whole is tested. This enables the entity to isolate any impairment at an individual asset level (if applicable) before proceeding to test at the CGU level. This requirement would apply only when the entity: