The Olympic legacy: Beijing vs London

The London 2012 Olympic and Paralympic Games were widely regarded as a huge success. Spectators, officials and competitors alike praised not just the efficiency of organisation, but the spirit in which the games were held.

That the host nation performed strongly in the medals table helped the atmosphere, but just 21% of UK businesses consider success by individuals or teams competing in major sporting events as important. This compares to 51% of their peers in previous host country, China. 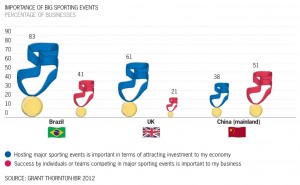 However, 61% of UK businesses believe hosting big sporting events is important in terms of attracting inward investment compared to just 38% in China.

A very interesting divergence in opinion.

Prior to the Olympics we reported that emerging economies view large sporting events as key to attracting investment, and made the point that the necessary capital expenditure on venues, transport and technology infrastructure can be transformational in emerging economies. In Brazil, which is gearing up to host the 2014 FIFA World Cup and the 2016 Olympic Games, 83% of businesses are positive about the investment opportunities these events bring.

So why, four years on, are Chinese businesses less than enthused?

Daniel Lin, managing partner at Grant Thornton Hong Kong, explains: “As an emerging market, China benefited from the 2008 Beijing Olympic Games in a way that boosted their profile globally, rather than driving solid inward investment to the economy. The IBR results clearly shows that the image-lifting result brought by the Beijing Olympic Games is far more significant than the actual business growth in China.”

The key issue is that these events put emerging economies in the global shop window. London is a fully established global city. Beijing is not there yet (although it is catching up fast). The quantifiable, long-term impact of London 2012 was always going to be relatively more important given the respective positions of the two economies on the development curve.

Beijing 2008 was a demonstration of China’s growing economic power, its legacy primarily measureable in increased international prestige. London 2012 was much more focused on a quantifiable legacy and the regeneration of one of its more deprived areas.

Therefore in many ways, the real work of London 2012  begins now. Ahead of Rio 2016, it will be interesting to see whether the expectations of UK businesses have been matched.