Merger and acquisition remains a fast but increasingly complex path to growth for many businesses, essential preparation can overcome the challenges.

Despite an ongoing climate of economic uncertainty, global deal activity has held up relatively well, with many businesses maintaining the view that merger and acquisition is an essential element in their growth strategy. However, transactions are taking longer to conclude, which could affect the deal’s overall contribution to growth. Successful leaders are, therefore, spending more attention on preparing their business and anticipating early on all potential obstacles to the negotiation and valuation process, financing the deal and ultimately integrating the two organisations.

According to Grant Thornton’s International Business Report (IBR), 25% of global business leaders conducted domestic deals in the past 12 months, while 17% were involved in international transactions. The global figures also show that 15% of businesses cite merging with another company as part of their strategy for the next two years.

While the appetite for domestic deals is strongest, 18% of emerging Asia-Pacific businesses aim to acquire internationally – a higher proportion than in any other region. Indonesia, Thailand and Vietnam have seen vigorous inbound activity and remain highly attractive to foreign investors. Around 16% of North American businesses are looking for international deals, while in Europe the figure was 12%. Despite Brexit uncertainty, the UK continued to lead on cross-border deals, while elsewhere Europe international deal activity was strong in Germany, the Netherlands and Italy.

This article explores the current M&A landscape, why businesses are choosing M&A as a strategy, and how to best approach such challenges as valuation, selecting acquisition targets, financing deals, and successfully integrating merged businesses.

Organic growth is getting more challenging

Andy Morgan, global head of M&A and partner at Grant Thornton UK, believes the attractiveness of M&A has not changed. “It is high on boardroom agendas because organic growth is getting more challenging. M&A is still seen as a quick route to building and extending capability, geographic coverage, and achieving greater scale.

“M&A is a fundamental point for many businesses now, almost irrespective of size, because their markets are global, and they always need to be looking at how they are responding to the different market challenges in their industry.”

Of the global businesses surveyed, 42% said access to strategic markets was a key factor driving their M&A strategy, while 39% cited a desire to build scale quickly. A similar proportion (38%) said they wanted access to new technology, while in emerging Asia-Pacific this figure was 45%.

Charles Rousseau, financial advisory partner at Raymond Chabot Grant Thornton in Montreal, Canada, believes that the rush for digital capabilities has contributed significantly to recent transactions. “Demand continues to be extremely high, sales prices are increasing and I would say, at least for North America, buyer confidence is boosting the economy,” he says.

“If you want to gain a foothold or build a distribution network in a particular market or region, that takes time and effort; in making an acquisition, you can accomplish that relatively quickly.”

The M&A landscape has become more complex on a global scale for a number of reasons. Deal-making in developed Asia, for example, is currently subdued as a result of current global trade uncertainties. The focus of outbound M&A from China has shifted, with activity in 2019 at its weakest in a decade, as regulatory scrutiny of Chinese companies tightened.

Morgan says: “The M&A landscape is impacted to a degree by the challenges around the uncertainty that everybody faces currently, whether that’s political or economic, in a global, local market or industry context.”

The deals themselves are getting more complicated too, with the parties involved becoming more sophisticated as they try to acquire new capabilities – such as data and digital technology – that are often far removed from their traditional core business.

Rousseau points to increased diligence. “We’re seeing more transactions take longer because either strategic or financial players are taking time to ask more questions before doing a transaction,” he says.

Valuations, meanwhile, are challenging. Businesses have to feel confident that they can achieve what they want with the assets they are purchasing. Morgan believes the focus should not just be on what businesses have done historically but on how the acquiring and target businesses will perform together in the future.

“You very rarely get to acquire good quality businesses on the cheap these days, so you’re probably going to pay full value for the acquisition,” he says. “Therefore, success is all about execution."

“In a world where visibility matters, the more uncertainty there is, the more challenging it becomes to build your valuation models. If you’re taking a longer-term view, then you must have a clear picture about where and why you’re taking that M&A strategy, and what’s going to drive value for you.”

Successful buyers think carefully about why they are taking the M&A route, and how to source the right targets in the first place. IBR data shows that identifying the right opportunities was a barrier for 17% of businesses not considering M&A activity.

If you are only reacting to inbound opportunities, by their nature they will probably be highly competitive, says Morgan. Proactively building a strategic pipeline of potential acquisitions, and really working to unlock these, has benefits. “You start with a better understanding of the business and its trajectory, and you have probably built some relationships with key stakeholders, which gives you more comfort over what you are bidding on.”

Meanwhile, 30% of leaders saw quantifying synergies as a challenge to concluding future deals. Rousseau says: “What you’re purchasing must align with your manufacturing or operating capabilities. Are you going to generate the synergies that you think you will? That’s part of the assessment upfront.”

When it came to international deals, leaders were more anxious about lacking the right professional support, with 27% citing this as a critical challenge compared with 21% for domestic M&A.

“You have to look at regulatory differences in different countries, so that’s another complexity,” says Rousseau. “Beyond the legal due diligence, financial due diligence is more complicated because of the focus on earnings and, for example, tax optimisation, which is complicated by a cross-border transaction.

“The operational side has also become more challenging. You need to review management and teams, check the shape of any plant or machinery, that capabilities and processes are working. All of that is crucial in assessing the scope and the quality of the asset.”

While many businesses may perceive a shortage of finance as a significant constraint on organic growth, several markets have a healthy supply of capital for buyers.

“There is significant liquidity out there,” says Morgan. “And one of the interesting things for people contemplating M&A is that they have likely got a lot more diversity and variety in those funding solutions than they had five years ago.”

Leaders need to think carefully about what source of finance will best enable them to achieve their strategic goals. IBR data shows that 58% of businesses use existing funds to finance M&A, 43% use debt finance and 36% seek private equity investment. With the rise of debt funds, sources of debt finance are more varied than the traditional clearing bank leveraged finance operations.

“The rise of the debt funds has been truly disruptive to the funding landscape. They are bringing significant flexibility in terms of how they are lending, and where they sit in the capital structure,” says Morgan. “That creates plenty of opportunities, including blended debt and equity solutions, for corporates that are acquiring.”

Leaders should not forget the public market either, he says. Despite weaker capital flows, there’s still institutional appetite for the right propositions.

Private equity has become a significant driver of the M&A market, whether in financing the deal or selling a business in a portfolio. Dinesh Anand, global head of private equity and partner at Grant Thornton India, says: “Private equity funds are sitting on huge amounts of dry powder – they have the money to invest. Meanwhile, in many markets today, the cost of financing through debt is becoming very expensive.

“Private equity businesses also want to do more value-driven business transformation. Everybody’s looking at a five- to five-and-a-half-year average investment period, and they’re looking at transformations to enable long-term growth and a better return rather than just doing a cost stake-out and quick exit.”

While there’s plenty of funding available, Rousseau says businesses should nonetheless be prepared for a more thorough due diligence process. “You need to build an investment thesis and a solid business plan. You also need a strong deal team and the right support.”

“You must make sure your house is in order. You need to demonstrate your internal operations, and sound corporate governance. Resolutions should be updated, major corporate actions should be rectified, intellectual property well protected, you should have efficient tax and legal structures, and everything must be available in documents. Doing a vendor due diligence and your own internal review is often key to securing capital or selling your business.”

Planning for post-deal integration is crucial 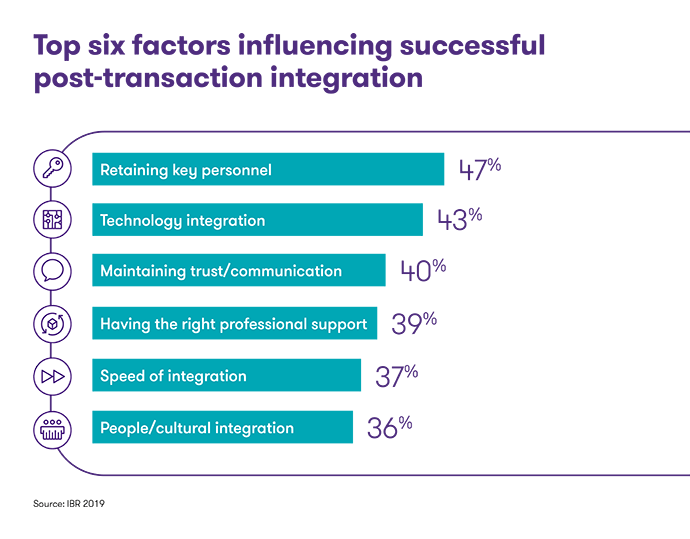 According to IBR global data, two thirds (66%) of leaders consider post-merger integration to be as vital to the financial success of the acquisition as pre-deal negotiations. In leaders’ experience, critical factors in successful outcomes include retaining key personnel (47%), technology integration (43%) and maintaining trust and communication (40%). While the pre-deal process can demand intense focus, the integration phase also requires attention early on in the process.

Rousseau says: “There are many reasons upfront that can have an impact as you try to integrate the business. Planning, structuring and prioritising is how you create value in a transaction, and keeping momentum post-deal is critical.”

Divergent cultures in the companies involved can also present challenges, he adds. “It’s surprising how two different businesses will operate based just on the culture, the way they work, the methodology, the communication… and then sometimes the infrastructure of both businesses won’t fit.”

Morgan says: “You need to be very clear in any acquisition where the value that is going to accrue to your organisation is going to come from. You also need to be clear on the metrics to be applied to measure the delivery of that value post-deal. The more clarity you have got on that before the transaction, the better your prospects of delivering well against it.

“Think about where the critical talent is in the organisation you're acquiring, and how you’re going to lock that in, and align it with your own business and culture.” Identifying key staff and incentivising them early on is essential, while communication to all personnel is vital to creating momentum.

Of equal importance is communication with customers. A clear communications strategy, before and after the deal, can answer any questions about why the deal is happening and what customers can expect to see from it.

Amid the complexity, don’t lose sight of the purpose

Successful acquisitions come down to capturing the value of the asset and realising the synergy goal as soon as possible, but in the current environment, where complexity can protract the process, that requires a lot of work and clear thinking upfront.

“The risks around M&A come down to the implementation,” says Morgan. “It is fundamentally about whether you have a clear and well-mapped rationale for why you are buying that business in the first place. And then, what’s your strategy for the implementation and integration of that acquisition into the broader business once you have it?”

Keeping focused on the initial goals for growth and anticipating the friction points at every step of the deal and post-deal process will greatly enhance your opportunity for locking in gains and achieving transformative growth.

Top tips for achieving a deal that delivers growth

Speak to your local Grant Thornton adviser or the experts below to discuss your M&A growth strategy or the stages of the deal process.

How Grant Thornton can help