The research shows that support is particularly strong among business leaders in Italy (70%), Spain (66%), France (64%) and Greece (62%), where rates are higher than the European average.

Grant Thornton’s most recent quarterly global survey of 2,500 businesses in 36 economies also reveals that 63% of eurozone businesses would like to see further economic integration among EU member states. Their response to the question of a uniform tax rate offers a taste of where this is wanted.

Francesca Lagerberg, Global leader for tax services at Grant Thornton, comments: “In Europe, we have continued to see downward pressure applied to corporate tax rates. This year, Italy reduced its rate from 27.5% to 24%. French president-elect Emmanuel Macron has likewise vowed to cut corporate tax from 33.3% to 25%. But rates in these countries – alongside Germany at nearly 30% - are still among the highest in the EU. Our data tells us that business leaders want a more even playing field in future. Certainly, President Macron is already pushing for more tax harmonisation across EU states.”

However, some businesses feel strongly that each country should determine its own rate, with only 6% of businesses in Ireland, 10% in Estonia, 28% in the Netherlands and 30% in Lithuania supporting the idea of an EU-wide regime. Again, there is some correlation with the low rates these countries currently enjoy (see Figure 1). Outside the eurozone, only 16% of UK businesses express their support, as divergent policy pledges on corporate tax emerge ahead of the June general election.

Francesca Lagerberg adds: “Corporate tax cuts are politically in-fashion as a route to reviving demand and stimulating investment. Lowering the rate to 15% is one of President Trump’s big economic promises, so it comes as little surprise to learn that, in eurozone countries where rates are low, most businesses do not welcome the prospect of these being raised to meet an EU-wide standard. They want to be able to compete with the world’s largest economy.”

“Business leaders in eurozone countries where corporate tax rates are high, on the other hand, wish for a more symmetrical experience. The exceptions are Germany and Malta, where rates are high, but where the majority of businesses would prefer each country to set its own. This could be because both countries are currently enjoying a competitive advantage: Germany remains the dominant force in Europe, with business optimism soaring high at 72%, and Malta is on track to be the fastest growing economy this year.” 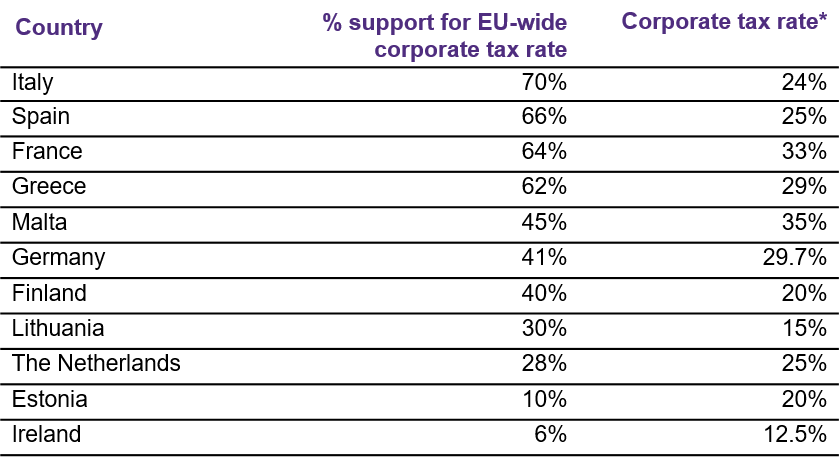 *The overall corporate tax rate can range due to local tax trade rates; the figures stated here are the current average or indicative rate for most firms in each country.

The Grant Thornton International Business Report (IBR), launched in 1992 initially in nine European countries, now provides insight into the views and expectations of more than 10,000 businesses per year across 36 economies. More information: www.grantthornton.global

Questionnaires are translated into local languages with each participating country having the option to ask a small number of country specific questions in addition to the core questionnaire. Fieldwork is undertaken on a quarterly basis, primarily by telephone. IBR is a survey of both listed and privately held businesses. The data for this release are drawn from interviews with more than 2,500 chief executive officers, managing directors, chairmen or other senior executives from all industry sectors conducted in January and February 2017.