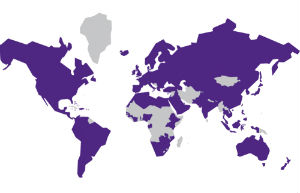 Follows on earlier 2013 expansion in the US, UK, Canada, Netherlands and South Africa

Grant Thornton today announced expansion in Japan, Italy, Paraguay, Bangladesh and Ethiopia, following a number of additional successful mergers and acquisitions around the world in 2013.

"We welcome these firms to Grant Thornton, joining more than 35,000 people in over 120 countries in our mission to help dynamic companies unlock their potential for growth," said Grant Thornton global CEO Ed Nusbaum. "We will continue to look for opportunities to better service clients, including future mergers and acquisitions with high quality organisations."

In Italy, Ria Grant Thornton merged with the audit and assurance operations of local audit firm, Prauditing Srl, previously with the Moore Stephens network.   The merger adds more than 20 professionals to the firm, including two new partners, and revenues of around $1.9 million. The merger will also increase the geographical coverage of Ria Grant Thornton, adding offices in Verona and Vicenza.

Grant Thornton Paraguay doubled in size following its merger with a former Baker Tilly member firm with strong experience in audit for the agribusiness, industrial and financial sectors. This was a strategic move which aligns with plans for Grant Thornton to be one of the top 5 accountancy firms in the region in future.

In Bangladesh, a joint venture between Grant Thornton Pakistan and Howlader, Yunus & Co. has established an advisory services practice bringing together over 100 staff spanning two offices and offering services to a variety of industries including major banks, financial institutions public corporations and family businesses.

Building on an already strong presence across Africa, Grant Thornton firms in Oman and Yemen merged with AW Thomas, a leading Ethiopian accountancy firm to create a new firm in the region. The new firm offers audit primarily with some tax and consultancy services